Golf Club at Ballantyne, The

Eagle Chase Golf Club is tucked away in the rolling hills of northern Union County, surrounded by nothing but acres of countryside and farmland. The secluded locale is ideal for golf, especially since it is conveniently situated less than an hour from Charlotte.

Red Bridge Golf & Country Club in Locust is routed through stands of mature trees that give the course a peacefully secluded feel. The layout wanders across gently rolling hills, providing a variety of elevation changes that range from subtle to dramatic. There is a stream that runs throughout the golf course, coming into play on a few holes.

Rocky River Golf Club was carefully carved from lush, rolling hills and natural wetlands with the intent of preserving the beautiful terrain as much as possible. The course flows across the dramatic natural contours of the land, providing holes with plenty of elevation changes. Running alongside the rolling fairways are winding ribbons of native wetland grasses that weave through rocky outcroppings.

Emerald Lake Golf Club is one of the Charlotte area's most popular public courses. True to its name, water is a prominent feature on the golf course. It's not just the water hazards that make this a tough course though. You'll be faced with strategically placed bunkers, sloped greens, and fairways tightly lined with trees.

With destinations like Hilton Head, Myrtle Beach, and Pinehurst, the Carolinas seldom look at their metropolitan centers for as golf meccas. Once upon a time, this was justifiable. Even as recently as the late 1980s, the Charlotte and Raleigh/Durham metro areas were severely lacking in daily-fee golf facilities.

But my how the times have changed. In Charlotte -- the Carolinas' largest city -- a recent influx of high end, pay-for-play golf course have put the Queen City on the golfing map to stay.

Once a sleepy Southern city with a few small skyscrapers, the Charlotte metro area is now home to more than one million residents and is the second largest financial center in the U.S. Twenty-story buildings have given way to 40-, and even 60-story towers. The downtown pulses with an energy that is the envy of many a mid-size city and an arts and music scene that would make many a larger city blush.

So what does all this mean for the game of golf in this bustling Piedmont burg? Charlotte has transformed from a private-course-oriented community to a city with enough quality public access golf to be considered a top golf business destination.

Serving the largest metro area in the Carolinas, Charlotte/Douglas International Airport averages 23 million passengers annually. So you're sure to find a flight into Charlotte. It has all the usual car and limousine rentals so you can travel around Charlotte or take a trip to the coast.

If you're driving into Charlotte you'll probably be taking either I-77 or I-85. Both interstates go through Charlotte. Interstate 77 runs north and south from Ohio. Interstate 85 runs along the East Coast from Atlanta through Charlotte until it merges with I-95. Interstate 95 then runs all the way north to Washington D.C. and Philadelphia.

What kind of golf can be found in Charlotte?
Unlike the more frequented coastal golf destinations, Charlotte offers upscale courses in and around a true metropolitan area. Until the mid-1980s, Charlotte had few public courses. But an influx of upscale courses coincided with Charlotte's ascent to the second largest financial center in the U.S. Moving from a private to public course mecca has turned Charlotte into one of the best business golf destinations in the country.

What's the best golf course in Charlotte?
Simply put, Olde Sycamore Golf Plantation is a shotmaker's course. This turns some golfers away, but if you enjoy having to think about your shot, this is your course. Opened in 1997, this Tom Jackson-designed course tempts golfers to go for it even when they know better. Olde Sycamore makes its way through a variety of small creeks, most of which come into play as lateral hazards at some point or the other. The greens are among the hardest in the city and are expertly manicured. Another bright spot for the golfer visiting Olde Sycamore is the price. While it would be a fine round at twice the price, Olde Sycamore has kept its fees low because of the growing competition in the Charlotte area.

What's a good course near the city that I should play when I'm in Charlotte for business?
Ballantyne Resort Golf Club opened on Charlotte's southeast side in 1998. Since then it has become one of the city's busiest. Travelers and locals alike enjoy this semi-private club that lays on one of the area's best pieces of land. While other Charlotte tracks are relatively flat, Ballantyne features generous, but expertly sculpted fairways, some surprising elevation changes and plenty of undulating greens. 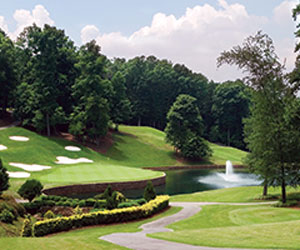 Birdie Golf Package at Rock Barn Golf & Spa
Perfect for the Weekend Warrior - or the Weekday Warrior. Two round of golf and a night of lodging in one of our 4-bedroom Stay & Play luxury townhomes, including access to fine dining for dinner at Champs and Rockers.
Price range: $225
For more information click here.

Latest reader ratings from this area